Here we show how Alba (3) and Arbeloa (2) attack high up the field. Iniesta (11) and Silva (7) tuck in to take the Italian defenders inside to create space outside for the fullbacks. If they are not followed by defenders then this created a BIG overload of players centrally for Spain to exploit.

1. Where (6) passes to will depend on how the opponent defenders react to these combination movements but with the left footer on the right and right footer on the left plus the fullbacks the team has two great options, one coming inside to attack the space inside and possibly shoot with his strongest foot; and one overlapping with width to get a good cross in, again with his strongest foot.

b) Timing of the runs (late and fast is best)

c) Timing of the pass (if the choice is to pass)

Here you see how Spain exploited the width of the field against Italy’s narrow midfield with both fullbacks attacking throughout the game, Alba in particular showed the value of this with a great forward run that resulted in him scoring the second goal.

As shown above; the 4-2-3-1 is a flexible way to play employing four units rather than the usual three. It can transform quickly into a more offensive pattern of play of 4-2-1-3 by moving forward the wide outside midfielders and with this push on the two fullbacks to fill the spaces they have left.

1. Wide players (Iniesta and Silva) attack the space between the fullback and the center back on both sides. Left on right, right on left; coming onto their stronger foot is an advantage because they come in against the full back’s weaker foot

2. Fullbacks (Arbeloa and Alba) attack wide to get crosses in and can cut inside also to do the job of the wide player

3. Center back’s (Pique and Ramos) spread wide to open up the attack from the back

4. Defensive midfielder (6) (Busquets) drops back in to cover and to start the movement also; he can fill in centrally or to the side

5. Attacking midfielder (10) (Xavi) plays between the opponent’s defense and midfield. He can interchange with the wide players or the striker (9).

6. 2nd defensive midfielder (8) (Alonso) is more offensive and creates support between the back and the front

7. The two defensive midfielders can interchange.

INTERCHANGES UP FRONT OF FABREGAS, XAVI, INIESTA AND SILVA

1. Here are some potential movements in front of the passer (8). All very simple but may cause CHAOS in the opponents defense. Spain know what they are doing in advance of the ball, the opponents do not; and this is to the teams advantage.

1. Four potential options for (3) in front of the ball. Cannot at this moment in the development of the session play a straight pass to (10) but there are four other options of a forward pass.

THIRD MAN RUNS FROM BEHIND THE BALL

Another aspect of their play was THIRD MAN RUNS. Alba for the second goal showed this with his late and fast run. Many runs were made like this diagram above to get in behind the Italian defense.

Spain’s movement OFF THE BALL is a joy to watch. The only players who you could say stay in their positions are the keeper and the center backs (4) and (5) the rest of the team seems to have great freedom to express themselves all over the field but at the same time so well coordinated that they cover for each other as this happens.

The movements in attack of the Spanish team epitomizes what can be seen in my 12-part video series – Coaching the 4-2-3-1, which you can check out here. 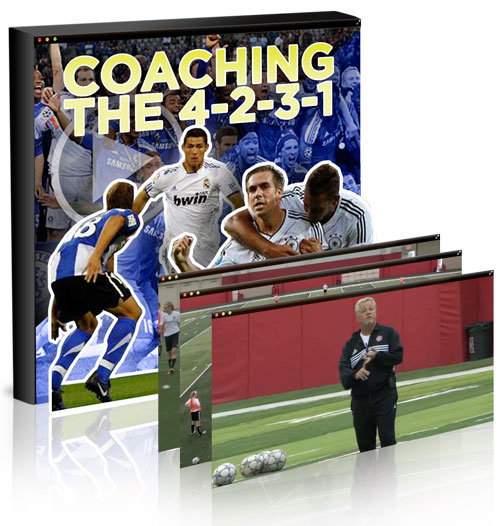 i wanted to subcribe to this