Would you like to score like Barcelona? Now you can find out how! Coaching the Barcelona 4-3-3 – Attacking is an eBook that tells you everything you need to know about how to build attacks from the back and create goal scoring opportunities like the Catalan champions. Discover how their system works and apply it to your own side so you can play the Barca way and push the score line in your favor.

As well as the eBook, we are including almost 60 minutes of video analysis at no extra cost.  So you can look at the videos as you read through the eBook. I have posted a sample video below.

Coaching the Barcelona 4-3-3 – Attacking is an eBook focused on how Barcelona builds its attacks and the skills you need to adopt their system for your own team. It looks at all the key elements of the Barcelona style of play, which is admired by coaches all over the world. Along with a tactical analysis of the Barcelona attack, broken down into three stages, the eBook is packed with drills to train your players in the principles and skills needed to score goals like Barcelona. 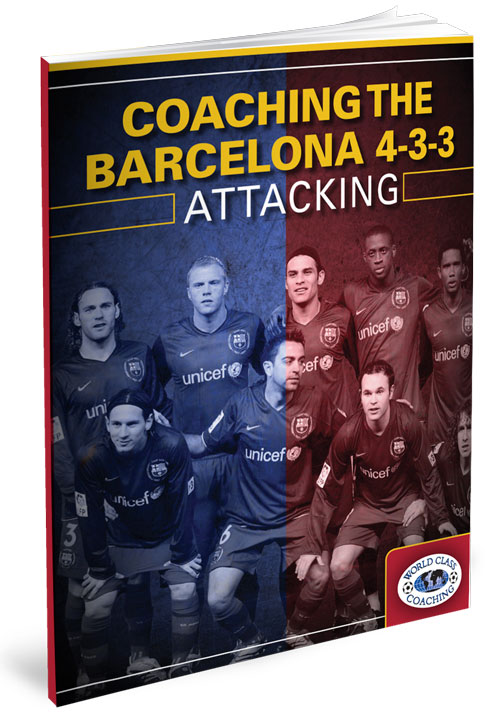 So if your team is struggling for ideas on how to create more goal scoring opportunities, why not learn from the best goal scoring machine around? Coaching the Barcelona 4-3-3 – Attacking is the blueprint you need to unlock the secrets to how Barcelona score so frequently and how to adapt their playing style to your own team and tip the score line in your favor. 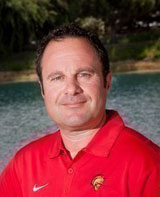 “Having just spent time at FC Barcelona this past December watching their teams train and play matches I can tell you this eBook does an excellent job breaking down their system and explaining how to train this system with your team.  These training exercises were the same ones I observed Barcelona use with their youth teams to develop their attractive style of soccer.  Having incorporated these concepts and exercises with my college team, club team and ODP I can recommend this eBook and video series as a must have for all coaches interested in playing possession soccer.  What I like best is that you get to see the big picture first and then everything is broken down for you.” Gabriel Bolton, Head women’s soccer coach, Cal State Stanislaus

“Discover how Barcelona creates endless scoring opportunities, and how you can replicate their tactics for your own team”

Under a series of talented managers, including Frank Rijkaard, Louis Van Gall, Pep Guardiola and Tito Vilanova, Barcelona has evolved to become one of the most dominant sides in world soccer. This dominance comes from playing a system in which every player knows their role and that playing as a team is more important than playing as an individual.

Over the last decade Barcelona has developed a smooth, accurate passing style, with players forming triangles and creating avenues for attack on the flanks. While they are a team of exceptionally gifted players, their success also comes from being tactically astute and having an understanding of space, time and positioning.

Coaching the Barcelona 4-3-3 – Attacking examines exactly how their tactics work. By breaking down their attack in three phases, it shows you how you can adopt their principles into your team, whatever skill level you coach at. The videos will also show you how theory translates into practice in real game situations. The complete package will deepen your understanding of how the Barcelona attack works and how to train your players in its philosophy and playing style. 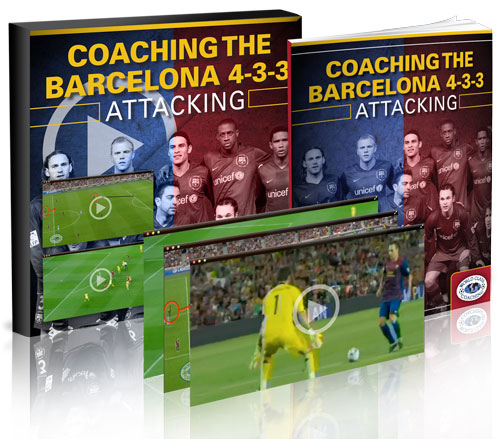 Author of Coaching the Barcelona 4-3-3 – Attacking, Scott Allison, has over 10 years experience coaching at many of Scotland’s elite clubs, following a playing career at East Stirlingshire in the Scottish third division. 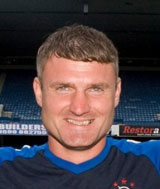 Clubs at which Allison has coached include St Mirren, Glasgow Rangers, Livingston and Partick Thistle. Allison was also employed by the Scottish FA as a coach education tutor and senior football development officer.

Inspiration for Coaching the Barcelona 4-3-3 – Attacking was born at The Milk Cup for youth sides, when Allison was youth coach for Livingston. In the quarter finals of the tournament Allison witnessed Barcelona’s young players up close, including a young Sergio Busquets. Impressed by their playing style and technical ability, Allison was inspired to begin studying the Barcelona system to see how they developed such high quality players and to develop drills to assist coaches to develop a similar style of play.

Coaching the Barcelona 4-3-3 – Attacking breaks down the Barcelona attack into three phases: building from the back, midfield possession and attacking in the final third. It profiles how the Barcelona system works in each phase before providing a series of drills for developing the technical skills needed to play each stage effectively. Accompanying the eBook, are three videos, totaling one hour of footage, which demonstrate all the key points in the eBook and demonstrate the Barcelona scoring machine in action.

Building from the Back

The first section looks at the roles and responsibilities of every player involved in starting Barcelona attacks, including the goalkeeper, fullbacks and central midfield. This includes looking at the attributes your players will need to have to be successful in playing the Barca way. Using screenshots from real games, it looks at how the defense splits wide to begin with and then progressively moves the ball into the midfield area.

The chapter then provides three exercises for helping players to understand the system and to develop the confidence and quality on the ball need to play it effectively. All the exercises are supplied with progressions to adjust the difficulty and to focus on specific skills.

The midfield of Xavi, Iniesta and Busquets is the beating heart of the Barcelona team. This chapter looks at how these and other players are constantly moving around to dominate possession through numerical superiority. Again, this chapter looks at the roles and responsibilities of each player and the mindset needed to adopt their smooth passing style of play.

The exercises in this chapter will improve your players’ confidence when on the ball, to be comfortable under pressure and to make better decisions on where to pass the ball. The exercises include a Rondo Possession game, passing in triangles and 2v1 passing and possession.

Attacking in the Final Third

The final section looks at the three key elements of the Barcelona attack: penetration, combo play and individual brilliance. It also explains how Barcelona can unlock packed defenses, how it deploys its players in attack and how it initiates attacks from the midfield. Using screenshots from real games, you will discover how to create an overload that can cause problems for opposing defenses, whether or not you have a player with the attacking brilliance of Messi.

The exercises will train your players to work in combinations around the box, how to create scoring opportunities with penetration and 2v1 combinations. Diagrams, coaching points and progressions are providing to ensure you gain the maximum benefit from every exercise. 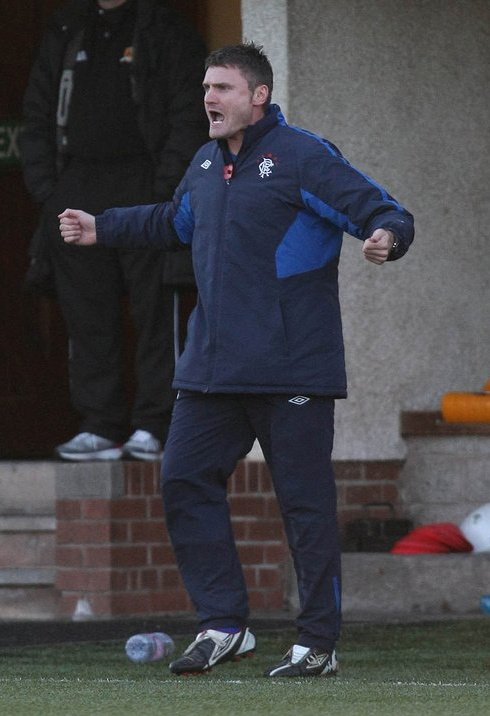 Coach Allison in action during a game

Partnering the eBook is a three part video series totaling one hour of real game footage that highlights the key points of the Barcelona attack.

The first video analyzes how Barcelona utilizes attack minded fullbacks and a triangle midfield to link with the center backs using short, sharp passes. The next video then focuses on the midfield and how Barcelona keeps the ball and utilizes movement and quick passing to launch attacks. The third video looks at how to overwhelm defenses with passing combinations and penetrating passes to get the ball in the danger area in and around the box.

There is no better team to learn from than Barcelona when it comes to attacking. Coaching the Barcelona 4-3-3 – Attacking provides you with an in-depth analysis of how Barcelona is able to create so many goal scoring opportunities against many of the best sides in the world. This provides you with a blueprint you can use for implementing their style of play for your own side.

From Coaching the Barcelona 4-3-3 – Attacking you will gain: 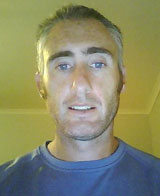 “I really enjoyed what Coach Allison has done with this eBook and videos.  He has done a great job to describe the key principles behind Barcelona’s fluid attacking play. I really like how he shows the role each team unit plays (within the 4-3-3 system) in achieving  Barcelona’s ultimate goal of putting the ball in the back of the net. Regardless of the level you coach at, the principles explained here can be used to guide your teams training program and overall development.” – Derek Malone, Cape Town, South Africa

And get 60 minutes of FREE video analysis with your purchase

Some coaches prefer books and some prefer videos for their coaching material. We will give you both.  With your purchase of the Coaching the Barcelona 4-3-3 – Attacking eBook, we will give you three tactical analysis videos so you can easily follow along as you read your eBook. 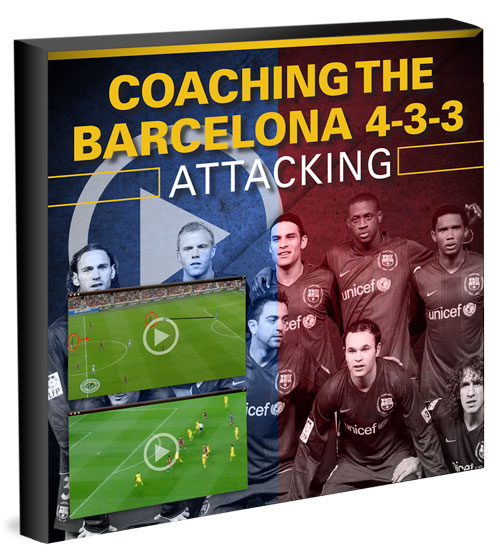 WORLD CLASS COACHING is recognized globally for the quality of its soccer coaching resources, which are used by over 40,000 soccer coaches from around the world. Coaching the Barcelona 4-3-3 – Attacking unless it achieves our exceptionally high standards. However, if you are not 100% satisfied with the quality of Coaching the Barcelona 4-3-3 – Attacking after six months of implementing its drills and exercises then please contact us for a no quibbles refund. 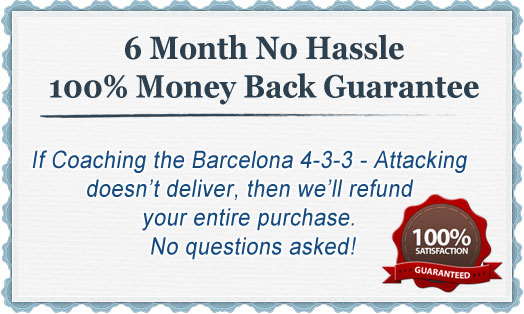 It’s easy to sit back and watch in awe as Barcelona creates goal scoring opportunity after enough, with Messi seemingly allowed to run rampant around the goal mouth. But Barcelona’s domination comes from a strict system of tactics and technical competencies.

Coaching the Barcelona 4-3-3 – Attacking explains exactly how the Barcelona system works and how its players work together to create an abundance of goal scoring opportunities in the danger area around the opposition’s box. Broken into three stages, it provides you with the in-depth knowledge you need to teach your players how to adopt their tactics along with drills to train them in the skills and mindset needed to play them effectively. What’s more, you also gain an in-depth analysis of an hour’s worth of real game footage so you can watch and learn how to play the Barca way.

If you want to win more games, you need to score more goals than the opposition. Discover how Barcelona do it in Coaching the Barcelona 4-3-3 – Attacking and unlock the tactics that can improve your team’s buildup play, possession and how you can score more goals and dominate games like the Catalan champions.

P.S. Coaching the Barcelona 4-3-3 – Attacking is a special eBook and video series on the Barcelona attacking style. It breaks the attack down into three stages and explains exactly how you can adopt their tactics to your side. A series of exercises will train your players in the skills and mindset needed to play it effectively and the three videos, amounting to an hour of footage, will show you how to replicate the fast paced passing and possession style of soccer used by arguably the world’s best team.

P.P.S If you are not 100% satisfied with the quality of the soccer coaching resources in Coaching the Barcelona 4-3-3 – Attacking within six months then we will refund your purchase in full, no questions asked.